Casual Employment Contracts and Casual Employees
Distinguishing between casual and permanent employees can be confusing and there is no definitive legal test. The term ‘casual worker’ is not a precise legal term but rather a colloquial expression.

It is estimated that around 26% of the total workforce in Australia are casual employees. Women and young people as well as those nearing retirement are strongly represented amongst this group. The average job duration for a casual is nearly three years.

Although a precise definition eludes the term ‘casual’, it is accepted that a casual is hired on an informal, uncertain and irregular basis. Bar staff or shop assistants who are never exactly sure when they will be required for work are prime examples. Casual positions are sometimes used to trial workers and permanent work is offered as a reward for good performance. 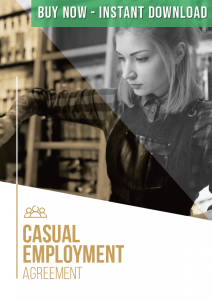 The main characteristics of casual employment are:

In essence, a regular and systematic engagement with a reasonable expectation of continuing employment are not usually characteristic of casual employment.

There are, however, so-called ‘permanent casuals’ in the Australian labour force or workers who have ongoing and stable jobs but are treated legally as casuals. Some casuals are better categorised as ‘permanent casuals’, whose hours or rosters may vary to some degree, subject to demand. The most common definition in awards refers to a casual as ‘engaged and paid as such’.

A distinctive feature of casual employment is that there is a separate contract of employment, each time the employee accepts an offer. The casual employee is given no guarantee of future employment and each contract effectively has a short fixed term. Whether or not a single contract is involved, or a series of them, the casual employment engagement is determined by the irregularity of the hours of work, any applicable award definition, the number of hours worked, and availability as and when required.